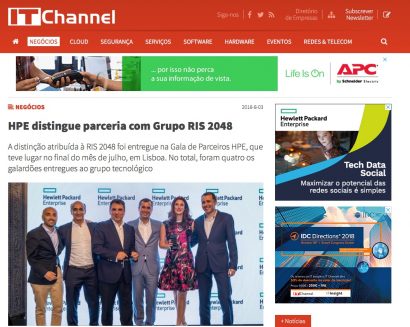 The distinction awarded to RIS 2048 was delivered at the HPE Partners Gala, which took place at the end of July in Lisbon. In total, there were four awards delivered to the technology group.

RIS 2048 Group is currently a Platinum Converged Infrastructure Specialist from HPE. After receiving the Hybrid IT Partner of The Year for Southern Europe award, ris group 2048 was able to further consolidate its partnership with HPE by obtaining four more distinctions.

During the HPE Partners Gala 2018, which took place in Lisbon at the end of July, the RIS Group 2048 / Evonic, received the award for “Partner of the Year” and was also distinguished in “Growth Financial Services”, “Delivery” and “Computing Strategy”.

EVONIC, a company of the RIS 2048 Group, founded in 2017 and dedicated to the development of consulting solutions and services focused on the new needs of information technologies, was responsible for a strong contribution to obtaining the distinction of HPE.